The shape of wave-packets in a three-layer hydrodynamic system

The article is devoted to the problem of wave-packet propagation in a three - layer hydrodynamic system "layer with a hard bottom - layer - layer with a cover stratified by density. The current research on selected topics is reviewed. The mathematical formulation of the problem is given in dimensionless form and contains the equations of fluid motion, kinematic and dynamic conditions on the contact surfaces, as well as the boundary conditions on the lid and on the bottom. Using the method of multiscale developments, the first three approximations of the studied problem are obtained, of which the first two are given in the article, because the third approximation has a cumbersome analytical form. The solutions of the first approximation and the variance relation are presented. The evolution equations of the circumferential wave-packets on the contact surfaces are derived in the form of the nonlinear Schrodinger equation on the basis of the variance relation and the conditions for the solvability of the second and third approximations. A partial solution of the nonlinear Schrodinger equation is obtained after the transition to a system moving with group velocity. For the first and second approximations, the formulas for the deviations of the contact surfaces are derived, taking into account the solution of the nonlinear Schrodinger equation. The conditions under which the shape of wave-packets on the upper and lower contact surfaces changes are derived. The regions of familiarity of the coefficients for the second harmonics on the upper and lower contact surfaces for both frequency pairs, which are the roots of the variance relation, are presented and analyzed. Also, for both frequency pairs, different cases of superimposition of maxima and minima of the first and second harmonics, in which there is an asymmetry in the shape of wave packets, are graphically illustrated and analyzed. All results are illustrated graphically. Analytical transformations, calculations and graphical representation of results were performed using a package of symbolic calculations and computer algebra Maple. 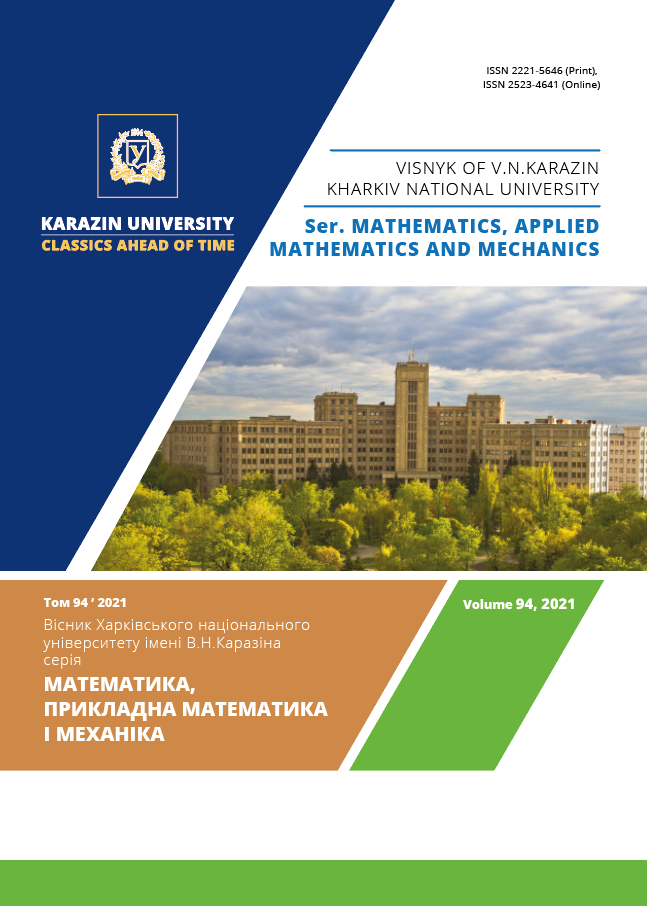 This work is licensed under a Creative Commons Attribution-NonCommercial-NoDerivatives 4.0 International License.

The copyright holder is the author.

Authors who publish with this journal agree to the following terms:

1. Authors retain copyright and grant the journal right of first publication with the work simultaneously licensed under a Creative Commons Attribution License that allows others to share the work with an acknowledgement of the work's authorship and initial publication in this journal. (Attribution-Noncommercial-No Derivative Works licence).

2. Authors are able to enter into separate, additional contractual arrangements for the non-exclusive distribution of the journal's published version of the work (e.g., post it to an institutional repository or publish it in a book), with an acknowledgement of its initial publication in this journal.

3. Authors are permitted and encouraged to post their work online (e.g., in institutional repositories or on their website) prior to and during the submission process, as it can lead to productive exchanges, as well as earlier and greater citation of published work (see The Effect of Open Access).