In a number of papers, the controllability theory was recently studied. But quite a few of them were devoted to control systems described by ordinary differential equations. In the case of systems described by partial differential equations, they were studied mostly for classical equations of mathematical physics. For example, in papers by G. Sklyar and L. Fardigola, controllability problems were studied for the wave equation on a half-axis.

In the present paper, the complete controllability problem is studied for systems of linear partial differential equations with constant coefficients in the Schwartz space of rapidly decreasing functions. Necessary and sufficient conditions for complete controllability are obtained for these systems with distributed control of the special form: u(x,t)=e-αtu(x).

Conditions for the existence of a system of the form (1) which is not completely controllable are also obtained. An example of a such kind system is given. However, if a control of the considered form does not exists, then a control of other form solving complete controllability problem may exist. An example illustrating this effect is also given in the paper. 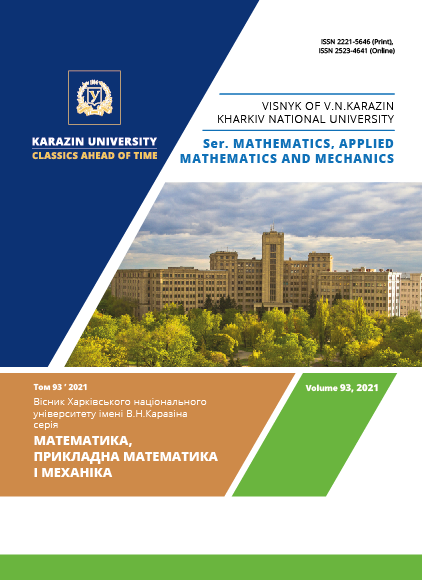 The copyright holder is the author.

Authors who publish with this journal agree to the following terms:

1. Authors retain copyright and grant the journal right of first publication with the work simultaneously licensed under a Creative Commons Attribution License that allows others to share the work with an acknowledgement of the work's authorship and initial publication in this journal. (Attribution-Noncommercial-No Derivative Works licence).

2. Authors are able to enter into separate, additional contractual arrangements for the non-exclusive distribution of the journal's published version of the work (e.g., post it to an institutional repository or publish it in a book), with an acknowledgement of its initial publication in this journal.

3. Authors are permitted and encouraged to post their work online (e.g., in institutional repositories or on their website) prior to and during the submission process, as it can lead to productive exchanges, as well as earlier and greater citation of published work (see The Effect of Open Access).